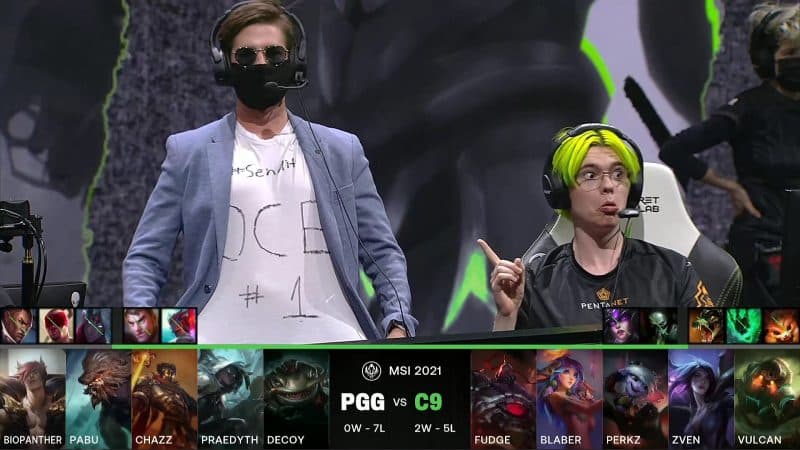 C9, after taking down a tournament favorite, had the relatively easy task of taking on winless PGG. But surprisingly, it was a big First Blood for PGG at the nine-minute mark. The side might be out of MSI, but they were looking to make C9’s life as hard as possible. In probably the slowest game of the day, PGG’s 1k lead was all the game had, until the 17th minute, when a Rift Herald in the mid lane saw the game ramp up. A fight broke out, but C9 didn't react quickly enough to the PGG engagement and they lost two members. Shortly after, C9 got their first kill bot side, bouncing on a caught-out BioPanther.

With the C9 tier two mid turret dropping, C9 looked for a fight but seemed unprepared. While the fight went one-for-one, PGG took another tower and kept a stable 3k gold lead. C9 again engaged a fight and it just all went wrong again. At the end of it, PGG picked up three kills and a free Baron. When the next Baron spawned, PGG started it up to force something out of C9. However, C9 fled the field as PGG tried to take the fight. Everyone was chunked to less than 40% HP but no one died as both sides reset. With Soul Drake and Baron up, C9 forced a Baron play, and they actually claimed it. The fight just about went C9’s way as they took down two members of PGG, losing just one themselves. But critically, with C9 fleeing the fight, PGG was able to take down the Infernal Soul.

CLOUD9 FALLS BACK TO EARTH

Though soon C9 made a huge mistake. Their roster split across the map and PGG pounced on the split-up members, taking down three members of C9. With the man advantage, PGG pushed into the C9 base. They started in the bottom side, and C9 simply couldn't stop them, so PGG pushed straight into the Nexus. PGG finally picked up a win in the Rumble Stage as C9 gave themselves a huge mountain to climb to make Knockouts on Day Five.